Hutongs are traditional neighborhoods in Beijing and other northern Chinese cities. These neighborhoods are created by a series of alleys or narrow streets (called Hutong) that are formed by connecting traditional courtyard residences, called siheyuan.

Beijing’s hutongs offer a window into the traditional culture of the city and its residents, and are some of the most popular destinations for tourists. The first hutongs were built in the Yuan Dynasty, and continued to be built in the Ming, and Qing Dynasties. Unesco estimates that 86 – 90 per cent of Beijing’s hutongs have been demolished since the 1950s due to modernization, the 2008 Olympics, and continuing development in the city. Most now only exist within the Second Ring Road, which surrounds the Forbidden City, Beijing’s city center.

Many of the remaining hutongs have been gentrified, or renovated by the wealthy, celebrities, and government officials. Some have been transformed into shopping streets or tourist attractions, with trendy courtyard hotels, shops, bars, restaurants and cafes.

Nanluoguxiang, Wudaoying, Yandaixiejie, which are located near the Drum and Bell towers, the Shichahai Lakes, and the Lama Temple, are some of the most famous and popular hutongs in Beijing. These hutongs and others like them are vibrant and fun. Historic residences and temples are scattered amongst all the restaurants, cafes, and shops. When family and friends come to town this is where we bring them. 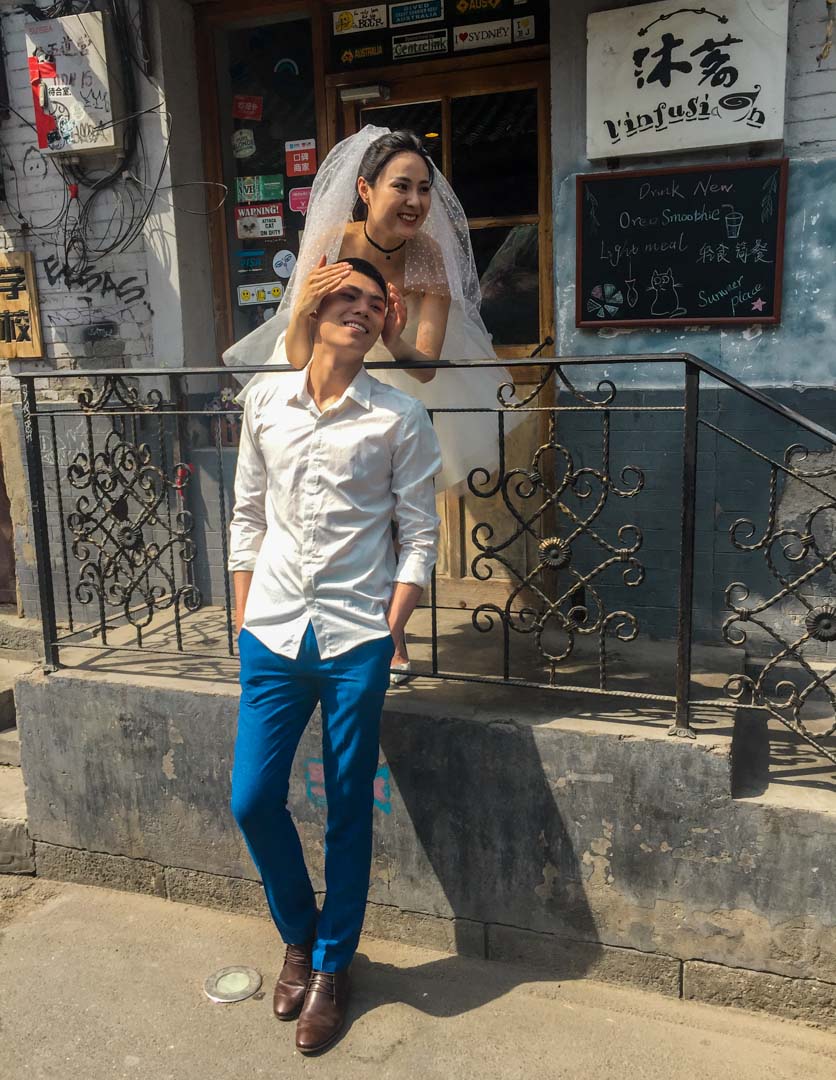 Young couple posing for wedding photos in front of a cafe at Wudaoying. 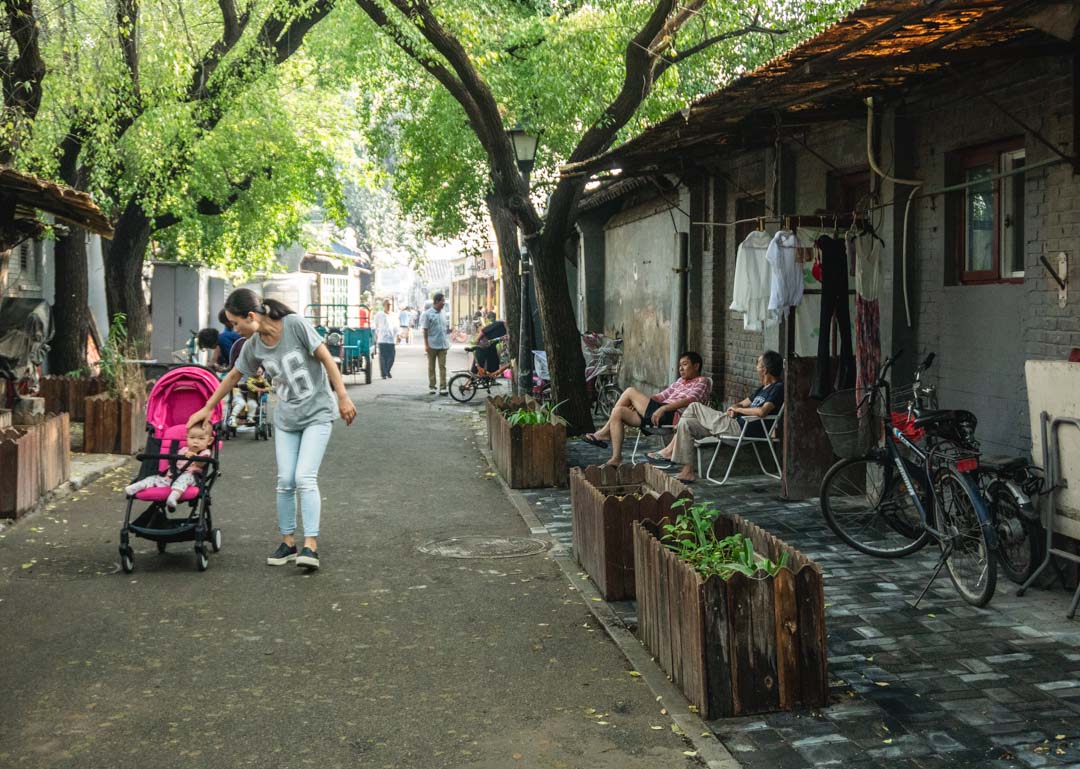 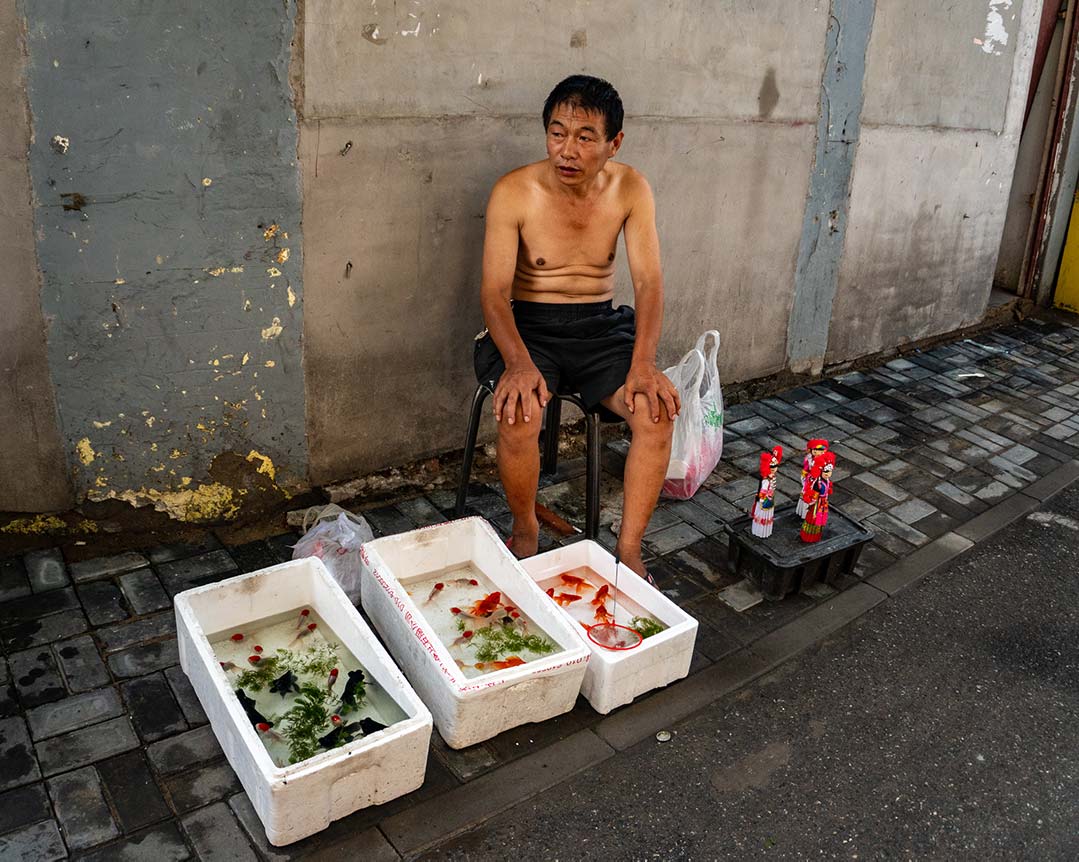 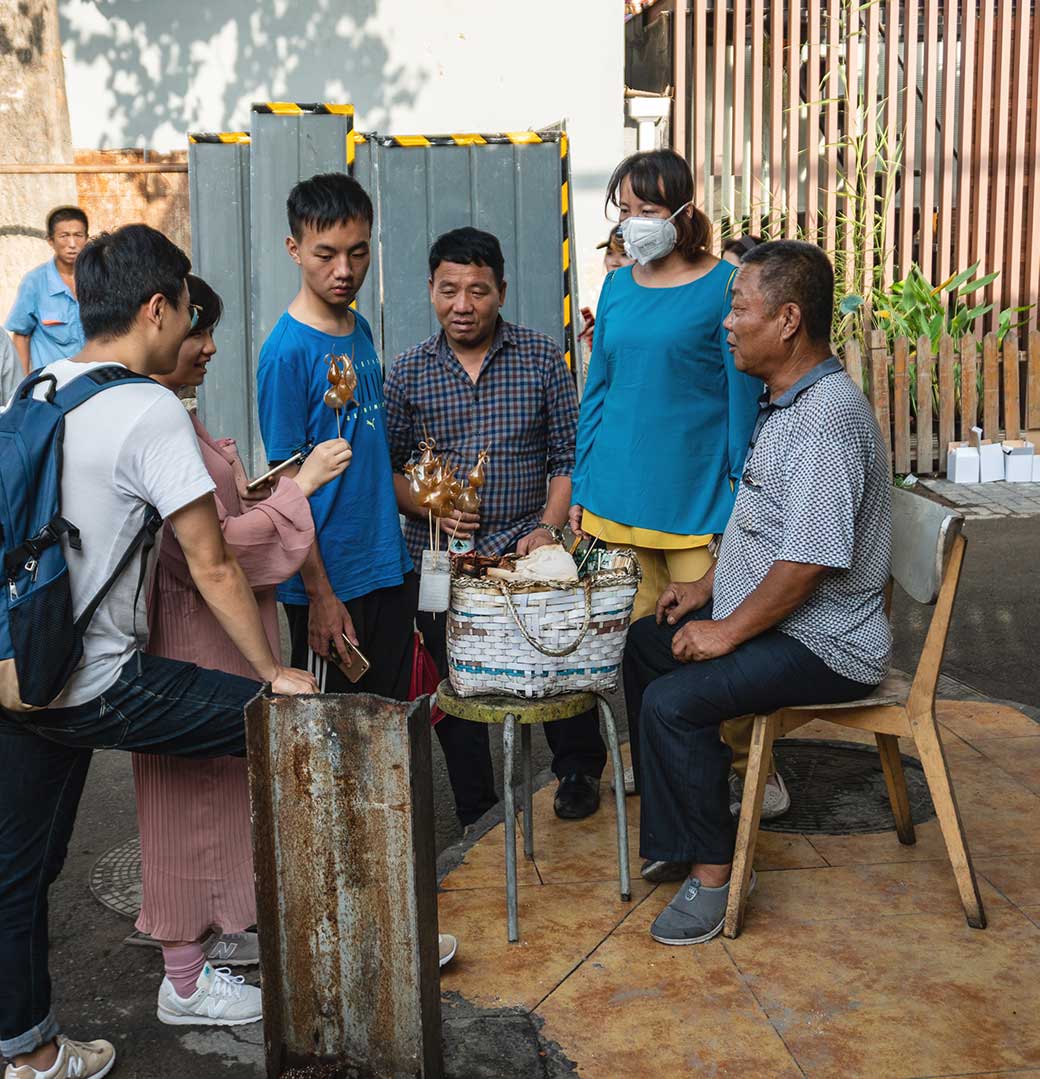 Walking the alleys between Nanluoguxiang and the Shichahai Lakes. locals hang out in front of shops, venders sell everything from sugary sweets shaped like animals; fruits and vegetables, and more.

Chilling over beer at Great Leap Brewing at #6 Doujiao Hutong.

When strolling down Nanluoguxiang, eating dumplings at Mr. Shi’s, or going to brunch at one of the cafes, it’s easy to forget that we’re not getting the full picture. Occasionally we’ll pass an alleyway or look inside an open door to see bicycles, hanging laundry or hidden entrances, but not much else about the lives of the people living there. 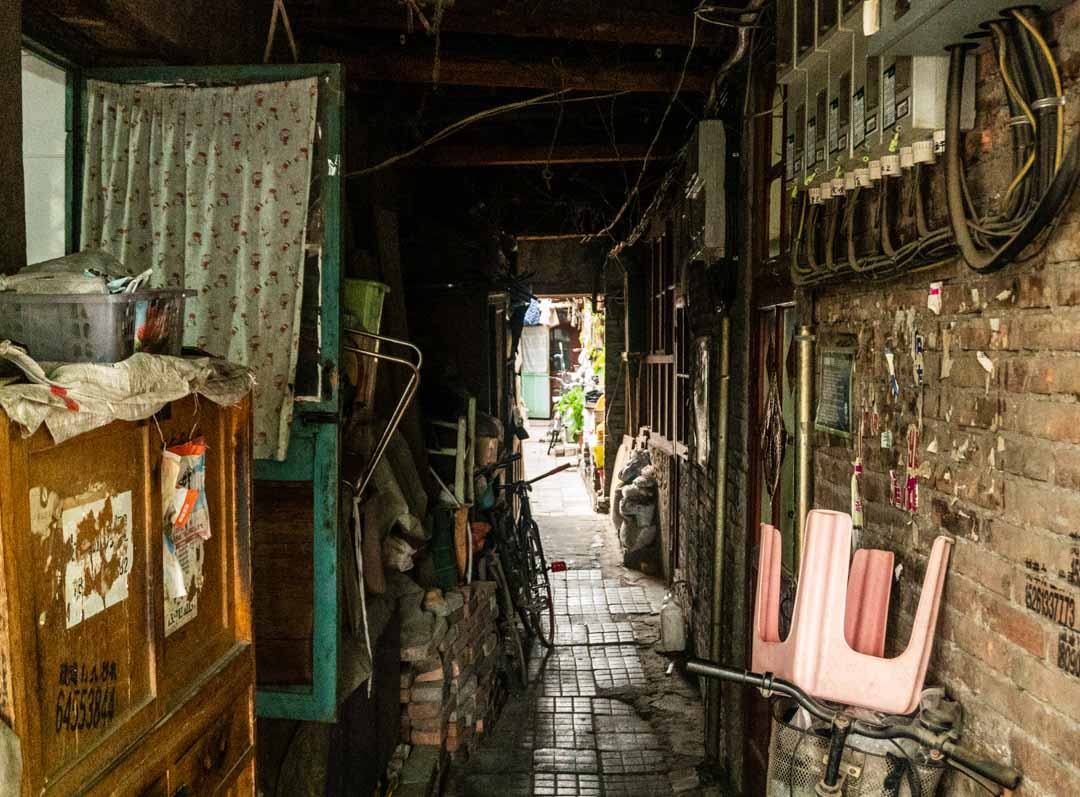 Views down a side alley and inside one of the open doors.

One of the more interesting intersections between hutongs. A resident was watering the plants in the alley on the right.

The vast majority of residents of Beijing’s older hutongs live in outdated, often primitive conditions with no central heating and inadequate or no indoor plumbing. We were talking to an expat who had lived in Beijing for years, marveling at the number of public toilets in the hutongs. They told us there were so many because most people didn’t have one at home.

Many locals consider the alleyways slums, that are not worth protecting. An article about the hutongs from the South China Morning Post writes “Local people have coined the term “messy yard” to describe the chaotic living conditions of many hutongs.”

Occasionally while out and about we will stumble upon what looks like an unassuming Hutong in the shadow of a Communist era apartment block, shopping center, or ultra modern high-rise. Some appear to have been renovated and are walled off. 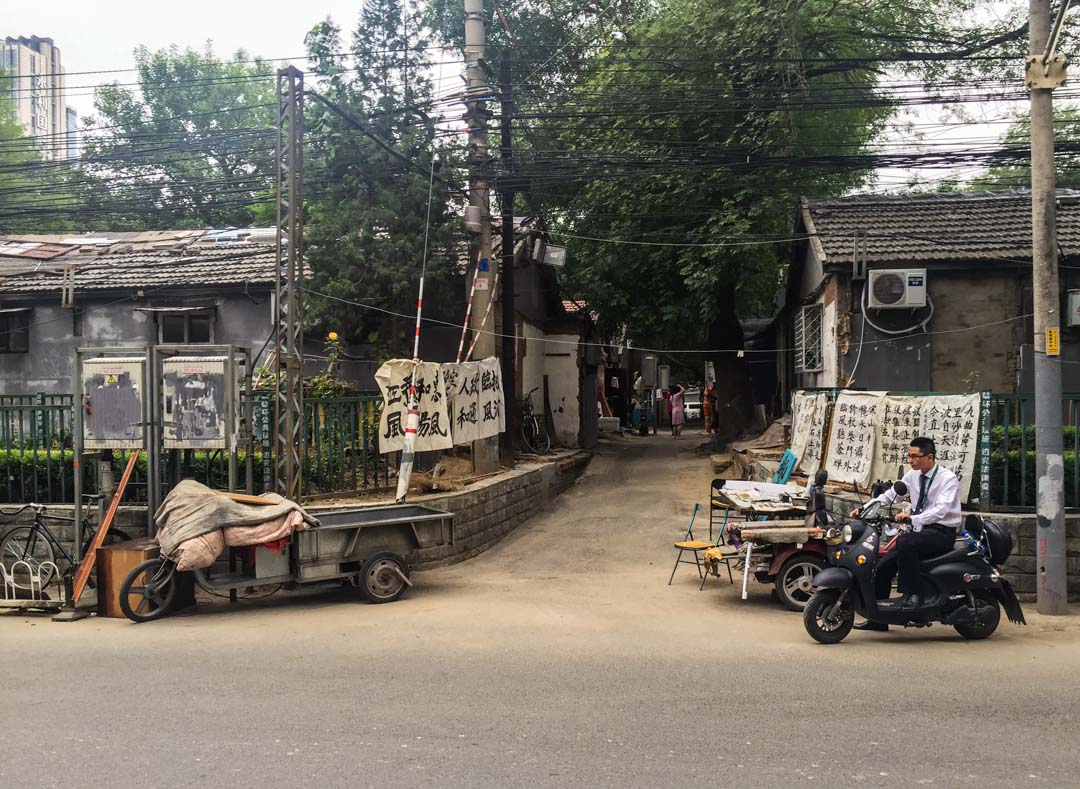 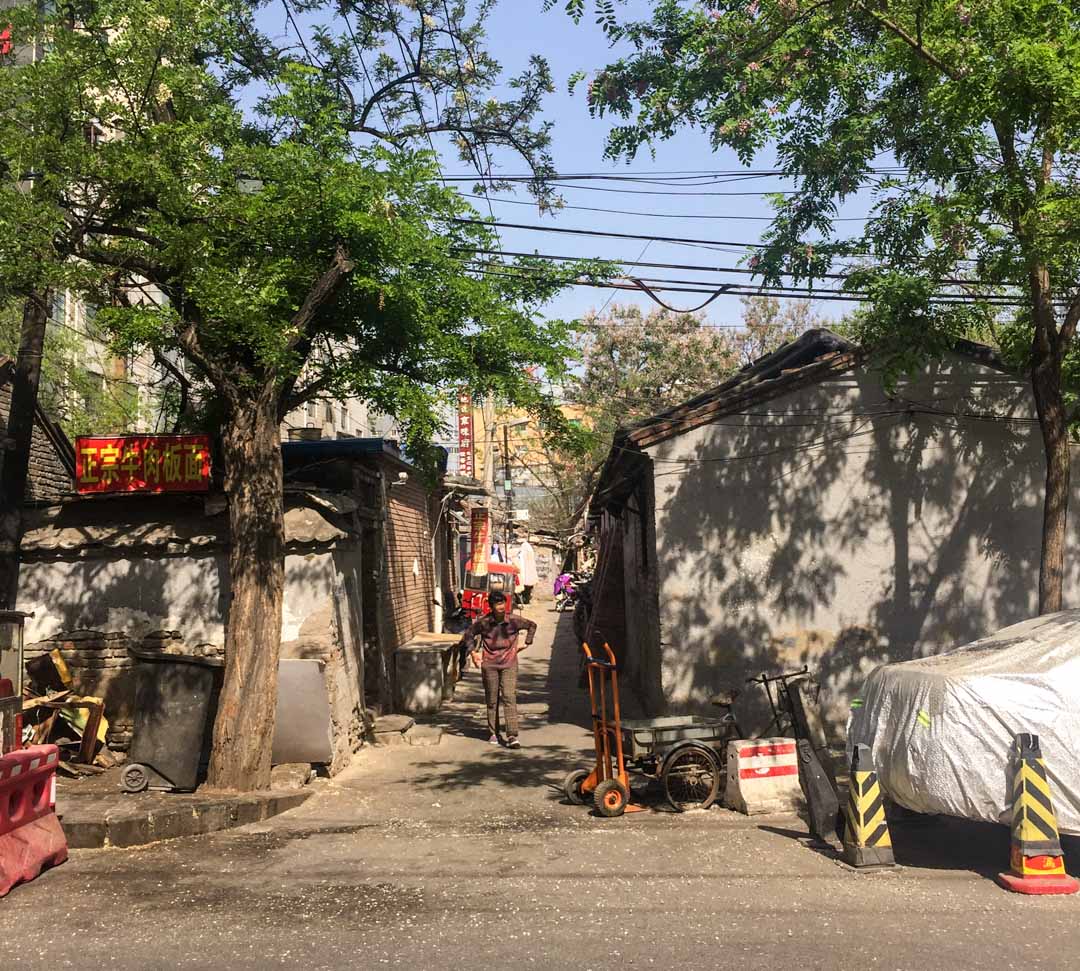 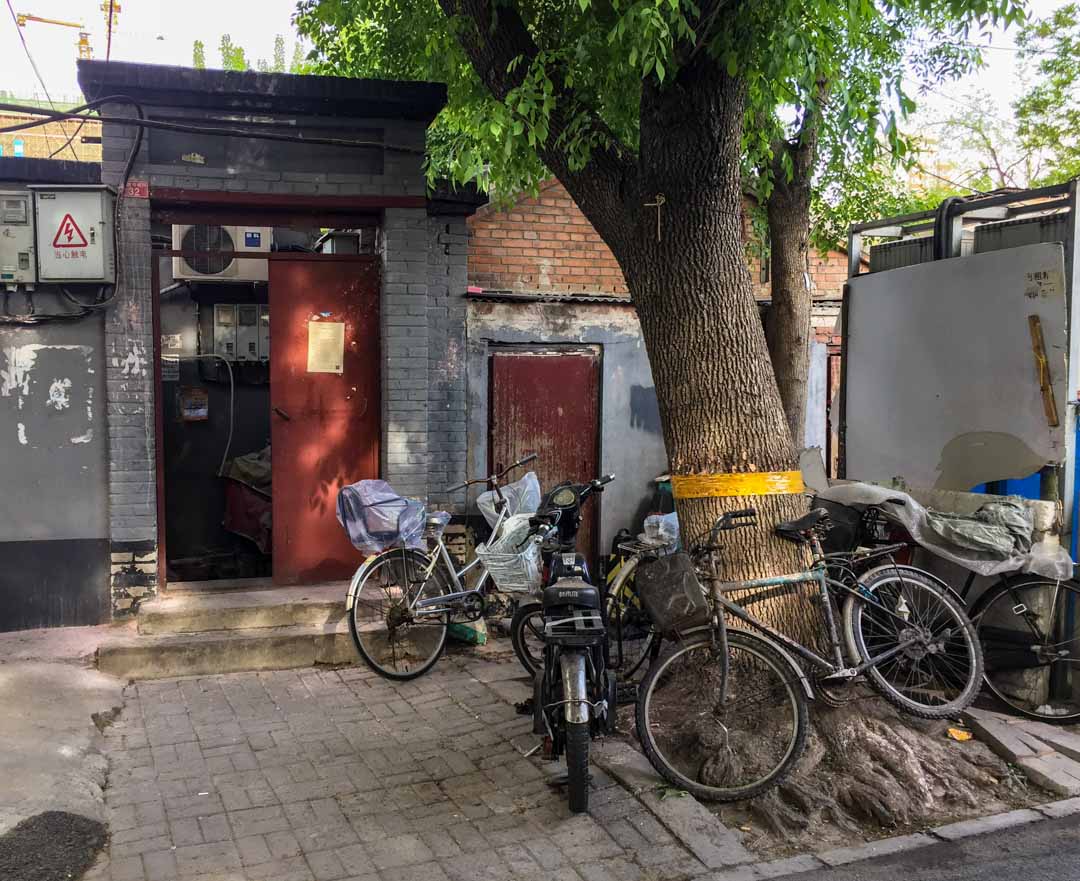 One evening while walking home from Tuanjiehu Park I turned off the 3rd Ring Road onto a side street looking for a shortcut back to our complex, and stumbled upon a series of alleyways that looked a lot rougher than I was used to seeing. While these hutongs were new to me, friends and colleagues who lived in Sanlitun and worked in the Central Business District, cut through the alleys almost daily on their way to work or home.

I went back the next morning with my camera to get a better look. I’ve been back several times. Usually I’m just passing through. Sometimes I take photos. Other times I’ve acted as tour guide for friends from out of town.

This series of alleys is surrounded by parking lots and 1970s era apartment blocks to the south and west, a modern luxury hotel, and business high-rises facing the 3rd Ring Road to the east, and more apartment blocks with shops to the north. From the south most passersby would have no idea these hutongs were here. 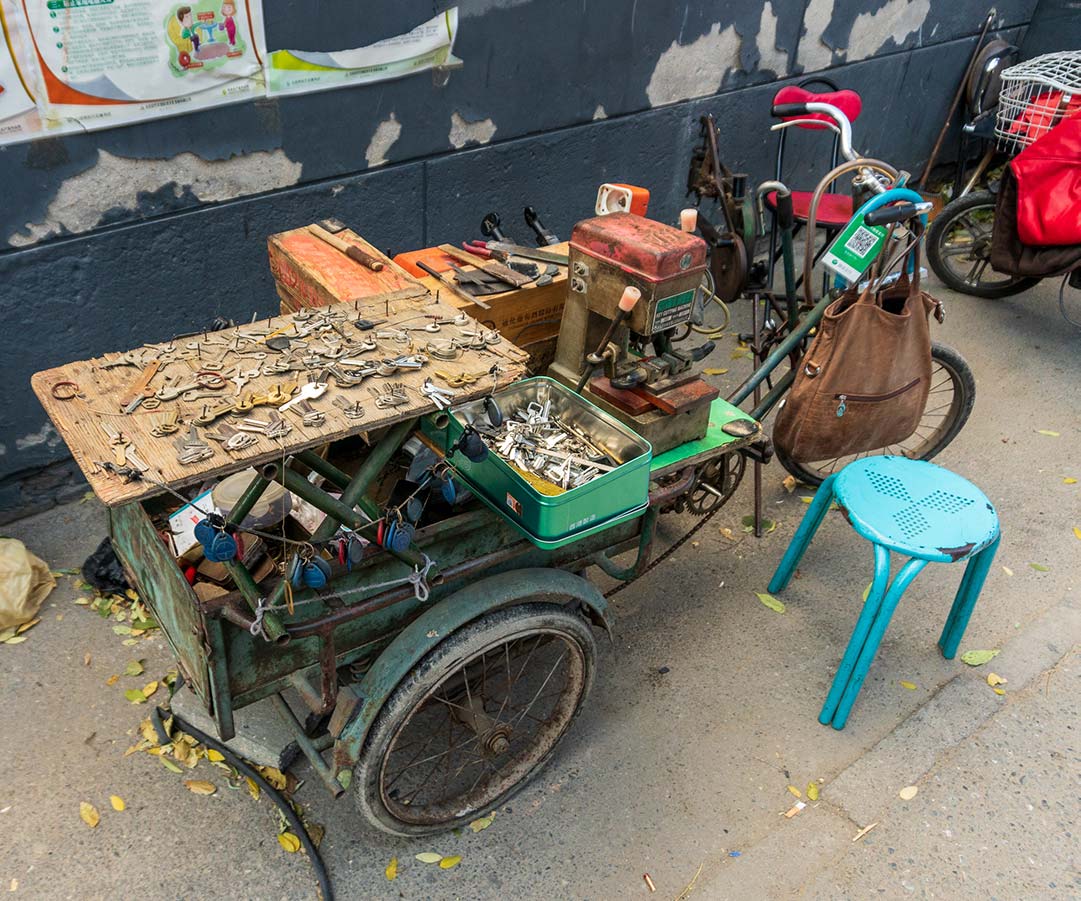 Located between a parking lot and an auto detailing center, Guandongdian 1st Alley can easily be mistaken for a driveway.

During warmer months a keysmith’s trike can usually be found close to the entrance.

Another alley intersects with Guandongdian 1st Alley at the first public toilets. The glass covered skyscraper in the background is the posh 5-Star Rosewood Hotel. 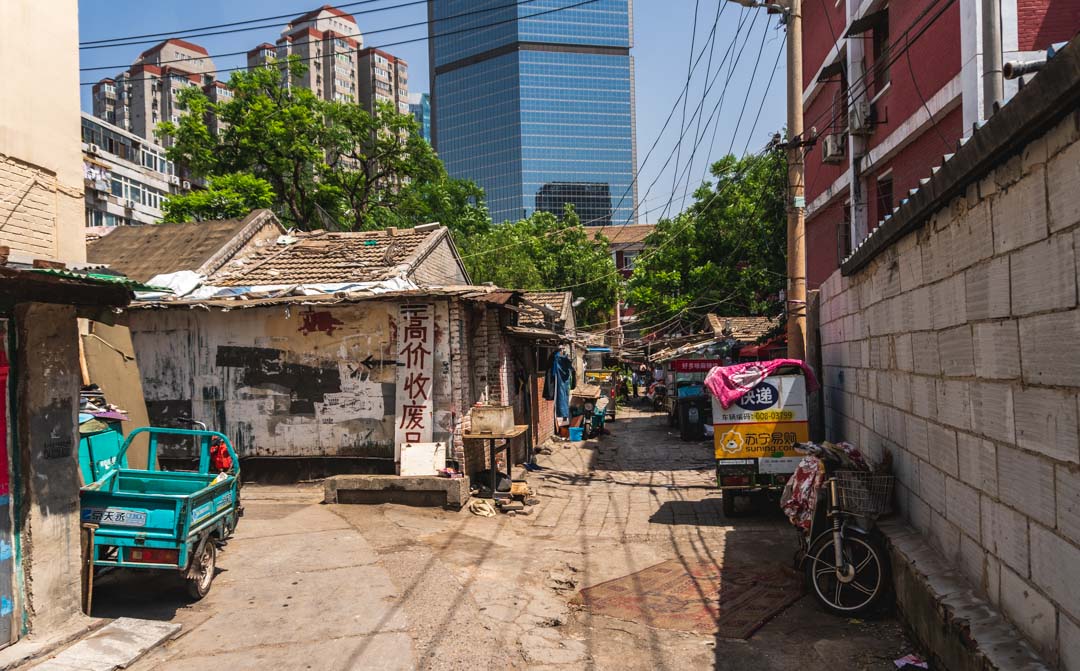 A few yards past the public toilet is the Traffic Police station. I’ve walked past it many times and still wonder why its there. 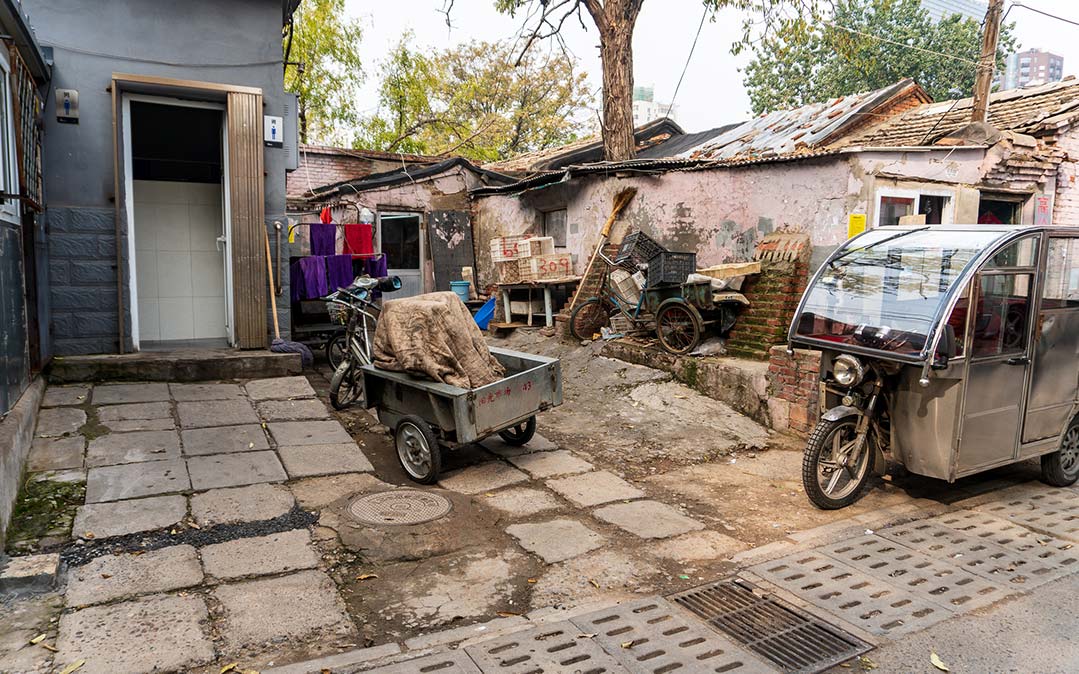 A group of courtyards with a barbershop sit next to another public toilet close to the intersection with Huashiying E Alley.

Two older men saw me looking around and pointed to a side alley. While taking photos a young girl came out from one of the doorways. 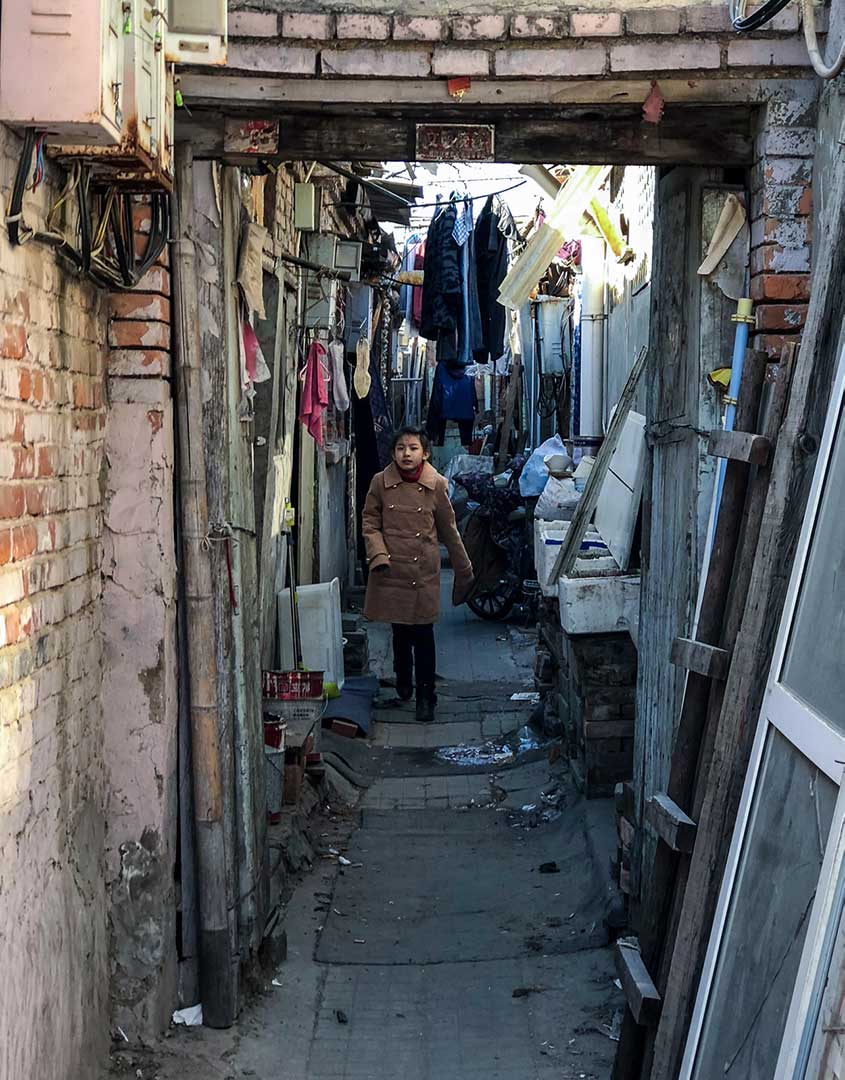 Heading east on Huashiying E Alley, I looked up to see a second story that was probably illegally by the owner at some point. 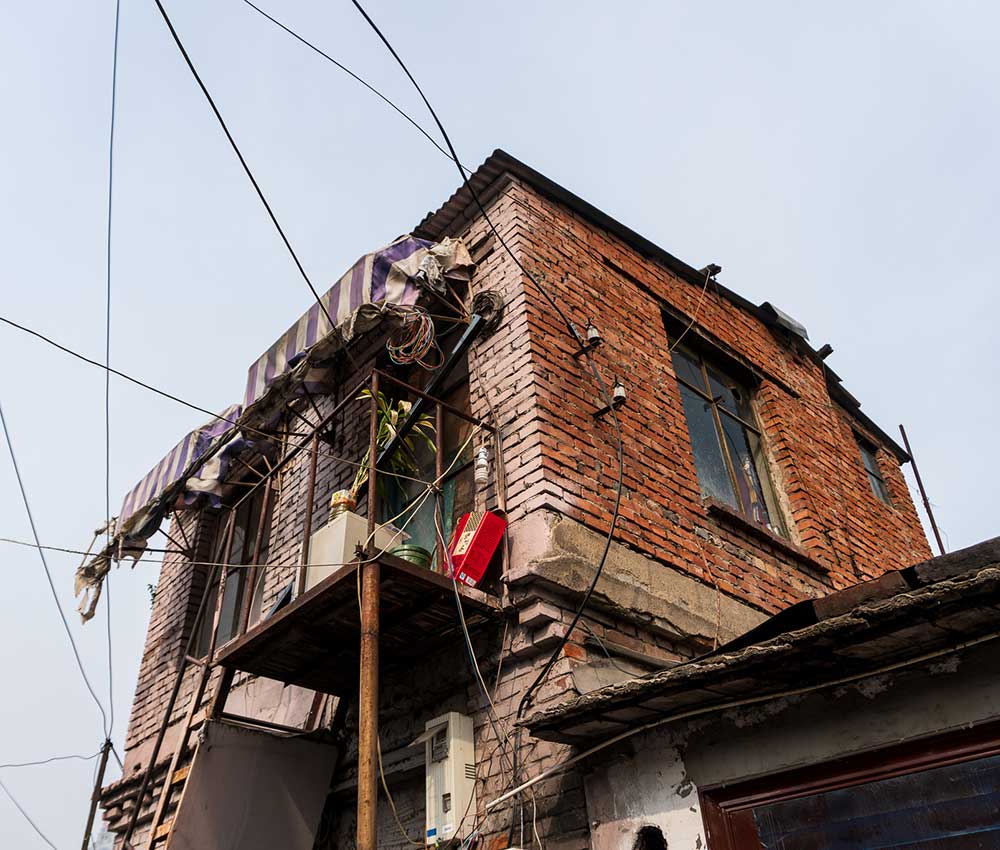 Several narrow side alleys split off Huashiying E Alley. I looked down a couple. Some had doors all the way down. In others the doors started further down or around the back. 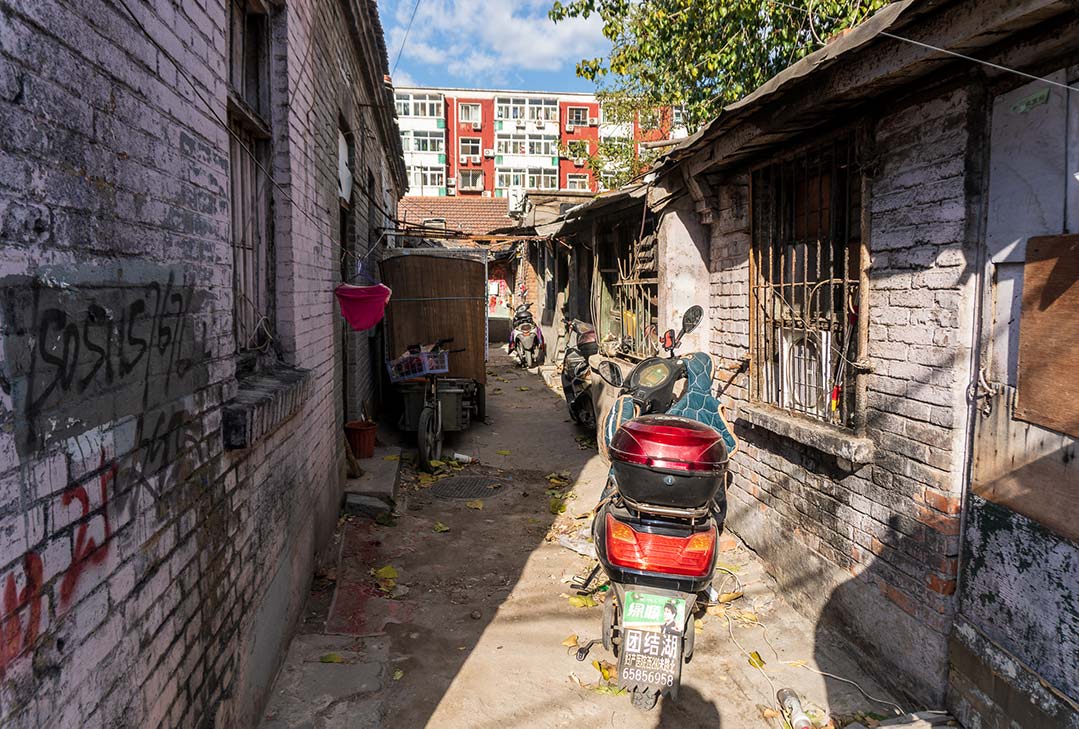 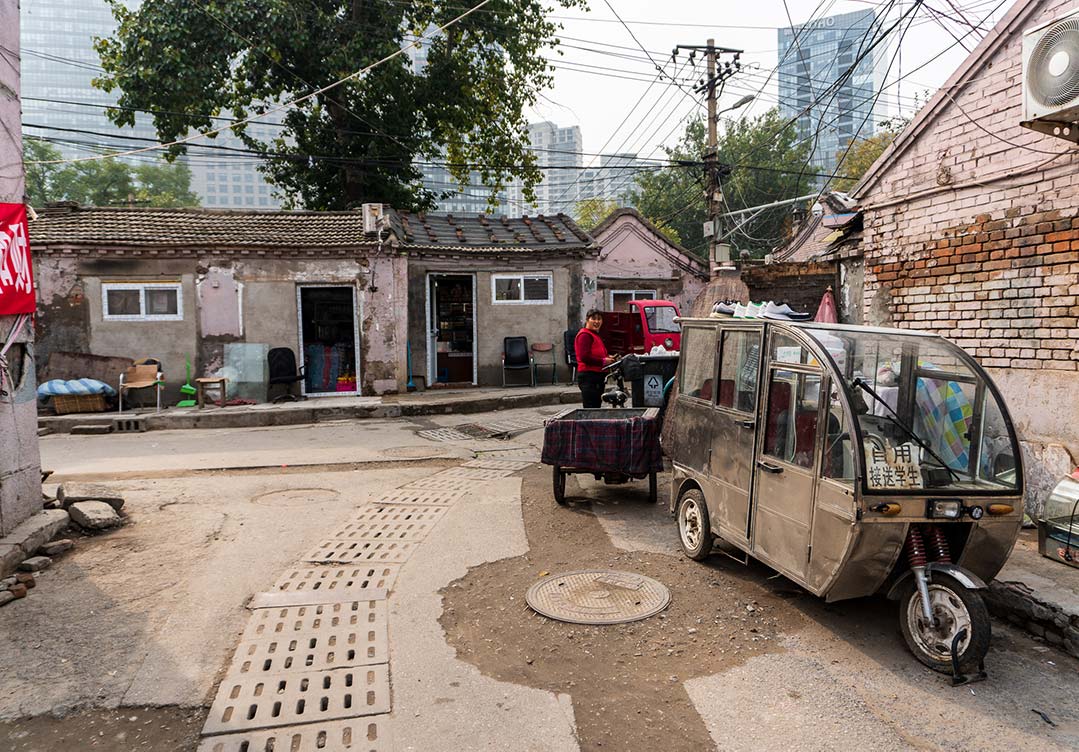 The intersection of Huashiying E Alley and Guandongdian 2nd Alley

Walking north up Guandongdian 2nd Alley toward the north entrance.

Looking down one of the side alleys off of the main alley. 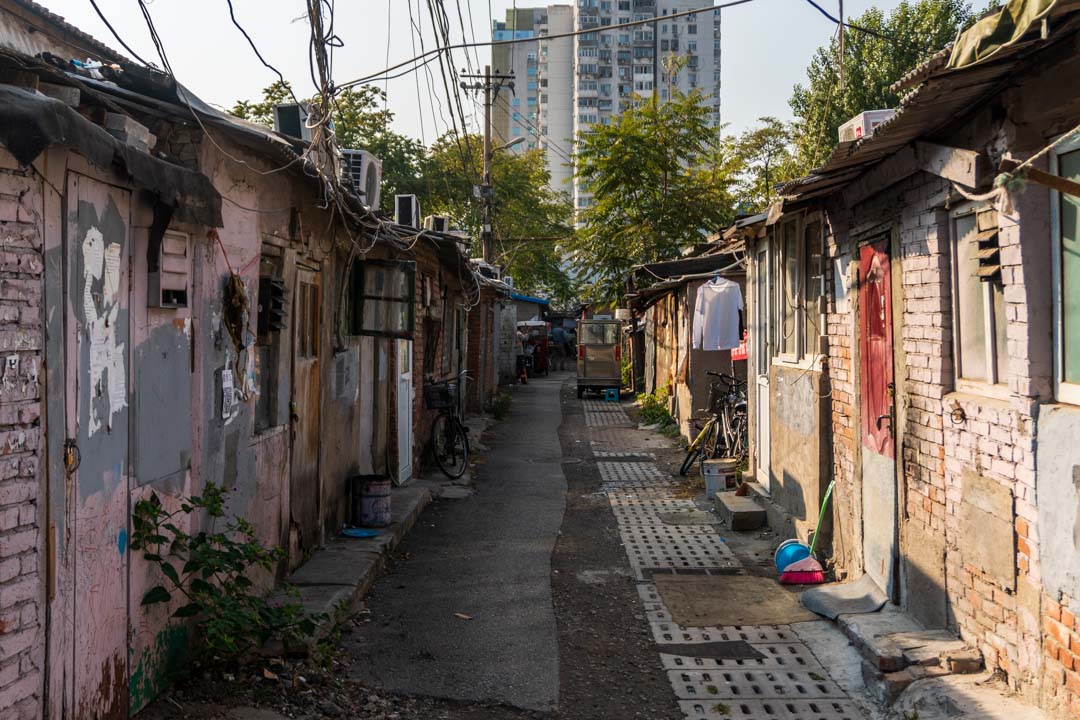 Guandongdian 2nd Alley intersects with a “proper” street with shops and 70s era apartment blocks. The north entrance looks to be the main entrance into the Hutong. 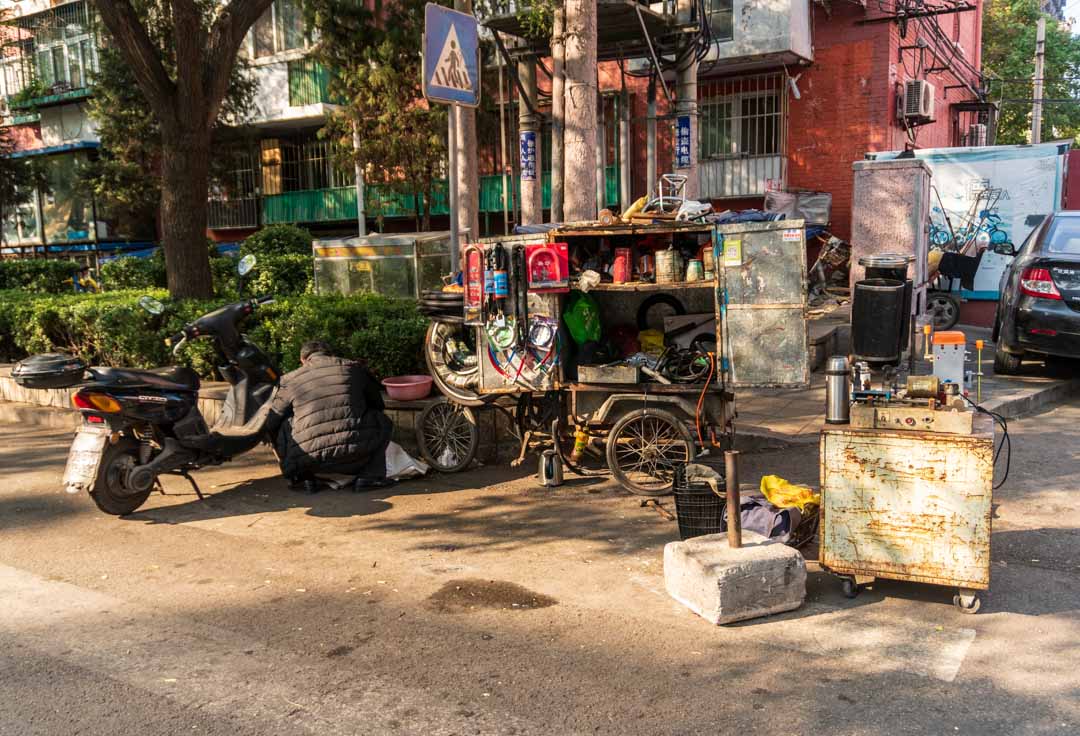 A mobile bike and scooter repair shop sits directly across the street from the entrance to the hutong. There are shops on either side.

These hutongs would definitely qualify as “Messy Yard”. Unlike most of the other hutongs I had seen in Beijing these alleys had not been renovated recently, if ever. The buildings in the first side alley looked particularly rough. It’s hard to determine whether these are the original structures, or buildings added during the 1950s and 60s to pack more people in, which happened in most of Beijing’s hutongs. On many of the renovated hutongs I’ve seen, the brick walls are actually brick shaped tiles covering older walls that had been shored up with cement. Here the brick was exposed or painted pink. Many of the residences were not walled off from the main alleyways. Life appeared to be lived on the street. In one of the side alleys a woman washing her hair in a wash basin in front of one of the doors. Junk and trash were everywhere.

I have walked through this Hutong many times over the past couple of years, usually on my way to Sanlitun. The city began renovations within a month after my first visit. I will cover that and other happenings in another post.

Check out The Last Hutongs Of Beijing And China’s Urban Change from Culture Trip and Razing History: The Tragic Story of a Beijing Neighborhood’s Destruction from a 2012 article in The Atlantic. 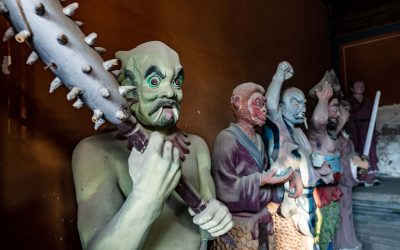 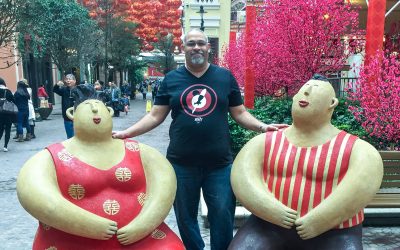